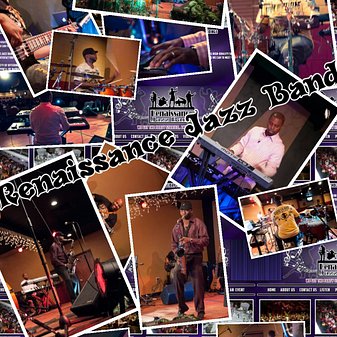 Renaissance is a high energy Instrumental Jazz, Smooth Jazz and RnB band that features captivating musicians who provide live entertainment for just about any event. Renaissance can tailor your music experience to fit the needs of your event, from weddings to corporate functions, and everything in-between.

Our repertoire includes music to please every generation. Renaissance Jazz Band members have played in a variety of professional settings and have been heard at numerous events and venues from small private parties to big showcases in the Tri-state area. We are one of the best Instrumental Smooth Jazz and RnB bands in the area. We keep any celebration going from start to finish and provide the best live entertainment for your money.

Trenton native Michael Carthan is the first call bassist for countless local gospel, rock, country, blues, jazz and R&B groups – he performs regularly with The Amazin Grace and the GLB, Renaissance Jazz Band, Mr. Lucky Blues Band and The Kim Yarson Band. In addition, Michael has performed with several other local talented artist & groups such as Minister William Carter III Ministries, Minister Al Matlock, Kameelah Waheed & GC, ShowTyme, Sandy Zio Band, Ja-tun Thomas & Random Acts of Soul Band, Black Frost Jazz Band as well as Jackie Greggs & Friends to name a few. Michael is also Bassist for his home church, Union Baptist Church, located in Trenton NJ.  Additionally, together with his bandmates, Michael has opened up for gospel luminaries Shirley Caesar, Richard Smallwood and Dorothy Norwood just to name a few.   Most recently alongside his band members of The Amazin Grace Little & GLB, Michael opened for The Delfonics.  Over the years the bands Michael has played in have performed at every major venue in the Tri-State area and beyond with countless artists such as Jesse Idol, Lydia Caesar, Clifford Adams & Michael Ray of Cool & the Gang, and Kym Miller & the late Dennis Richardson of Instant Funk.  He and his bandmates have also shared the stage with such greats as Kathy Sledge of Sister Sledge, Shirley Jones of the Jones Girls, The Tramps, Harold Melvin's Blue Notes, Glenn Jones and Eric Benet to name a few.   Recognizing the listing of performers Michael has played with it is clear that he is well versed in all genres of music including Pop, Rock, Jazz, R & B, Blues, Gospel, Country, Rap and Reggae. Michael has recently been awarded a 2017 TrailBlazer Award by the Lawrence High School administration at their black history month celebration. Additionally, Michael likes to give back to the community.   He realizes the profound positive effect music has on children and adolescents and has made direct donations to Somerset Home, an organization founded to assist abused, neglected and homeless youth.    This enforces Michael’s belief that musical performance is every bit as important in education and children’s lives as reading and writing.   To quote the great philosopher, Plato, “Music is a more potent instrument than any other for education”.

Richard Carter was born and raised in Paterson NJ. Born into a family of talented singers and musicians, he started his musical journey at age 5. He loved the bass and drums but his parents recognized his gift on the piano. By age 9, with his feet barely touching the foot pedals, he was the organist for his church. Born with perfect pitch, he has the ability to hear a song once and run with it. His gift and passion for all types of music enabled him to play with and fill in for all types of well-known artists at venues nationwide. From the likes of James Brown, Howard Hewitt, Teena Maria, Instant funk, Dorothy Norwood just to name a few.

Currently Richard is the Organist/keyboardist at Union Baptist Church in Trenton NJ and Trinity Seven day Adventist church in Newark NJ. He has helped to create and produce songs for various projects. You can also catch him performing, recording or sitting in from time to time with Jazz4Soul, Instant Funk, GLB band and more... A quiet and humble guy Rich let's his fingers express his passion through his music.

New Jersey native, James E. White is a skilled saxophonist who has traveled internationally for over two decades; dazzling the crowds and mesmerizing audiences near and far. James plays the soprano, alto and tenor saxophones, the clarinet, and the flute and has over 30 years of experience as a Jazz, Blues, Gospel and R&B musician. At the impressionable age of 17, he received a young artist recognition award from Governor Thomas Kean which helped to inspire James' passion for the woodwinds and his true love of the arts. Some highlights of his career include performing at Show Time at the Apollo, and performing with jazz artists Jimmy Scott and Leo Johnson. James has recorded and performed with various gospel artists, including Alvin Slaughter. In addition to performing abroad in various venues, James is a gifted minister of music who directs and performs regularly at churches throughout the Tri-State area. Closer than a Brother, Mr. White's debut CD, is played worldwide on Sirius/XM radio and on various U.S. and international stations. He performs regularly with the Dimensions Band Featuring Valerie Adams and The Gas House Gorillas. James has studied classical clarinet with Phil Russo at the Hart School of Music, and studied jazz with the legendary jazz artists Jackie McLean, Grachon Moncour III and Duke Anderson. In addition to performing with the aforementioned bands, Mr. White also performs with The Amazing Grace Little Band, The Brothers 2+2, Plex Entertainment and the James White Band. James is a true Gospel, Jazz, and R&B sensation. His soulful and captivating sound will inspire every listening ear to be moved by the power of music. James' tantalizing style and stage presence commands attention and allows him to instantly connect with audiences. Let this multi-talented and gifted artist entertain you!

Phil Miller was raised in Somerset, NJ where he began tapping into his vast musical abilities at the age of 2, by playing the drums. In his adolescent years, he was exposed to many different genres of music, including Gospel, R&B, Pop, New Age, Jazz, Classical, and Modern American. At the age of 17, he, professionally, showcased his eclectic knowledge in chorale and stage band ensembles. By the time he was 19 years old, he realized his natural proclivity for music and had mastered not only drums, but keyboards and bass guitar as well. He has also provided his musical talents to many well-known artists across various genres via music production and composition.

Phil had served as Musical Director for his first theatrical production in the late 1990’s. He has since then musically directed television productions and Off-Broadway stage productions.  He has also played many live performances with various recording artists including Alvin Slaughter, Fred Hammond, Donald Lawrence, The Hawkins Family,  The Judds, and currently serves as musician for Grammy-award winning Gospel artist, Hezekiah Walker.

Phil has appeared on various recordings either as the Musical Director, Co-Producer or Musician. His proficient musical experiences are much farther reaching than the “instrument” he carries.